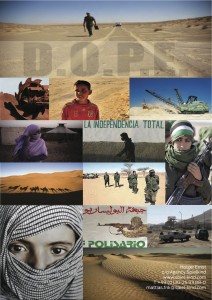 A modern Thriller. A clash of worlds. A trip never to forget.

Northwest Africa. The Western Sahara. A lost stretch of land which has been occupied by Morocco since the 70’s. The Moroccan army controls the land and fights the independence movement of the locals, which they claim are terrorists with links to Al Qaeda. The fragile political situation made this part of the world a hotbed for political unrest, corruption and safe harbor for all kinds of illegal trades and trafficking. It has become a main route for Colombian cocaine. The new Wild West.
Michael, a young charismatic American travels to the Western Sahara to work for his father who is the head of an international company that cooperates with the Moroccan government and mines in the occupied territory of the Western Sahara for rare earths. Michaels trip confronts him with an utterly unknown world and with the realities of modern day colonialism in which the quest for profit determines business practices.
While yearning for his father’s respect, Michael falls in love with a local woman who is about to get married. Michael gets caught in a situation in which he needs to prove himself and triggers a spiral of events that brings everything to the brink of collapse – connecting him to Abdel, a young Saharawian, who is caught in the realities of his economic situation. In hope for a better future Abdel starts to work for a local drug lord. A world which makes him do things and become a man he never wanted to be.

D.O.P.E. is a metaphor and tale of our times. Love, greed, globalization, corruption, dreams. A story of greed, love, hope. The longing for a future. A tale of becoming a man.